Olatoye is said to have died at the Intensive Care Unit of the University College Hospital, Ibadan on Saturday, March 9 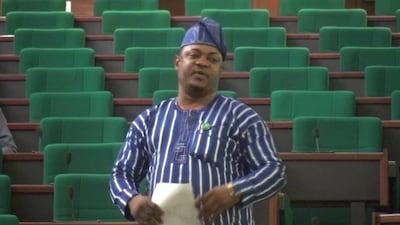 – The former lawmaker popularly known as Sugar died from a gunshot wound by some unknown gunmen on his head A senatorial candidate, Temitope Olatoye, popularly known as Sugar in the ongoing general election has reportedly died. Nigerian Tribune reports that Olatoye died at the intensive care unit of the University College Hospital (UCH), Ibadan, on Saturday, March 9, evening, following a gunshot wound he sustained after he was shot in the eye by unknown gunmen in Ibadan. Olatoye, who contested for the seat of Oyo central senatorial seat under the Action Democratic Party was said to have been shot in the head by some unknown gunmen during the election. The Cable reports on its Twitter handle said that an aide to Olatoye said the politician has been rushed to the accident and emergency unit of University College Hospital (UCH), Ibadan.

– Tambuwal says after voting as Nigerians elect new governors, state lawmakers However, Premium Times in its report said the UCH Ibadan has confirmed that the lawmaker shot on Saturday by political thugs is in a critical situation at the Intensive Care Unit (ICU) of the hospital. The spokesman of the hospital, Toye Akinrinlola, said the lawmaker was brought in a critical situation and was being resuscitated at the ICU. “As I am talking to you now, the man is in the Intensive Care Unit, efforts are on to try to resuscitate him,” Akinrinlola said. Olatoye vacated his seat as a member of the Federal House of Representatives representing Lagelu / Akinyele Federal Constituency he was also the chairman, House Committee on Urban Development and Regional Planning at the lower chamber. Meanwhile, bloggers previously reported that a former governor of Oyo state, Otunba Adebayo Alao-Akala, has delivered his polling unit for the candidate of All Progressive Congress (APC), Bayo Adelabu, in the governorship and House of Assembly election held in the state. Akala, who remained the governorship candidate of Action Democratic Party (ADP) in the election, delivered his polling unit in Ogbomosho region of the state to APC. Bloggers notes that the former governor, who returned to APC barely four months after leaving the party for ADP, voted at Olukutun unit 13, ward 7 in Ogbomoso north.